deborahdruick2 false
May 15th - July 10th, 2022
Stellarhighway is pleased to present Parlor Games by Deborah Druick, the artist’s first solo show in New York City. Druick’s paintings emphasize and exaggerate stereotypical concepts of precision, perfection and beauty in femininity. The women she paints are as much representations of the self as they are faceless archetypes, eliciting questions about identity, self-awareness and sentiment. The work presented in Parlor Games continues Druick’s confrontation of the concepts of willingness and constraint as they relate to the evolution of cultural ideals: “This new body of paintings presents a femininity bound by conformity and the societal pressures on self-presentation and messaging.” Here, Druick builds a world bristling with power dynamics, where people, animals and objects are all arranged as equal parts within tableaus set by an unseen hand. Positioned across brightly colored landscapes and well-appointed interiors, Druick’s stylized, faceless women attempt naturalism with some discomfort: perfect people caught in candid moments. Druick’s titular painting, Parlor Games, is a near-formal exploration of pattern, shape and color, depicting two women whose twin bodies are back-to-back in the midst of a game. The painting pushes at the stupendous coifs all of Druick’s subjects sport to abstract the shape of a vase from the negative space between the two figures; an optical illusion underscoring the visual trickery on which many cultures’ ideals of beauty rely. The Performer is a portrait of a woman balancing a stack of balls on a board atop her head, a pass at Victorian rules of etiquette, though the figure’s clothing and the gridded wallpaper belies a contemporary setting. Tulips catches someone in the moment of surprise upon discovering a vase of polka-dot tulips on her credenza, hands spread and body leaning slightly back, but still poised. Tilt displays a woman sitting in a domestic space, her head bent slightly forward as a disembodied arm manipulates the right side of her hair, tilting it over as if on a separate hinge from the left side of her head. Druick also includes dogs as a metaphor for obedience: Dog Daze presents a seated figure in a park gazing adoringly at her well-trained pup, lost in thought; in Dog Run, a more casual scene, a faceless woman calls out from amidst the bushes as two dogs pant and bay behind her. Through her work Druick peels back the layered codes of femininity, often inserting her subjects into situations where self-control and self-awareness are requisite. The ultimate fate of Druick’s players does not necessarily seem self-determined, and these vignettes leave the viewer wondering to what extent each figure knowingly eschewed their own agency. About Deborah Druick Deborah Druick was born in Montreal and studied at the Montreal School of Art and Design. Druick’s paintings use stylized figuration, formal patterns and saturated color to emphasize stereotypes of precision and perfection in female beauty. Druick began focusing exclusively on her studio practice in 2016, and has shown in exhibitions nationally and internationally including Shrine Gallery, New York; Dodomu Gallery, Brooklyn, NY; the Barrett Art Center, Poughkeepsie, NY; Pulse Miami with Vellum Projects; and, Katonah Art Museum, Katonah, NY. Druick’s work has been featured in Elephant Magazine, Vellum, Visionary Art Collective and twice in New American Paintings and Artmaze Magazine; and, she was awarded space at Vermont Studio Center. Forthcoming projects include a limited-edition print through Moosey Editions, London, UK.
WORKS
|
DOCUMENTS 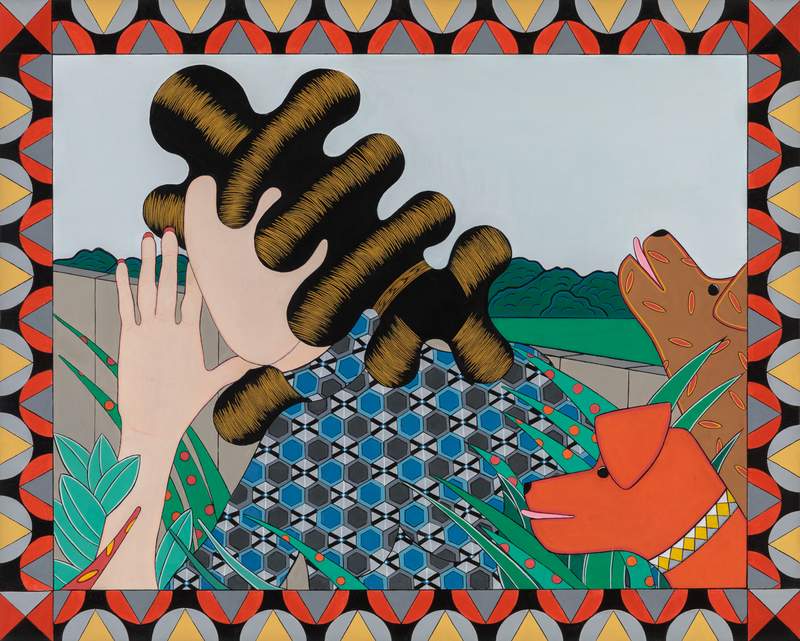 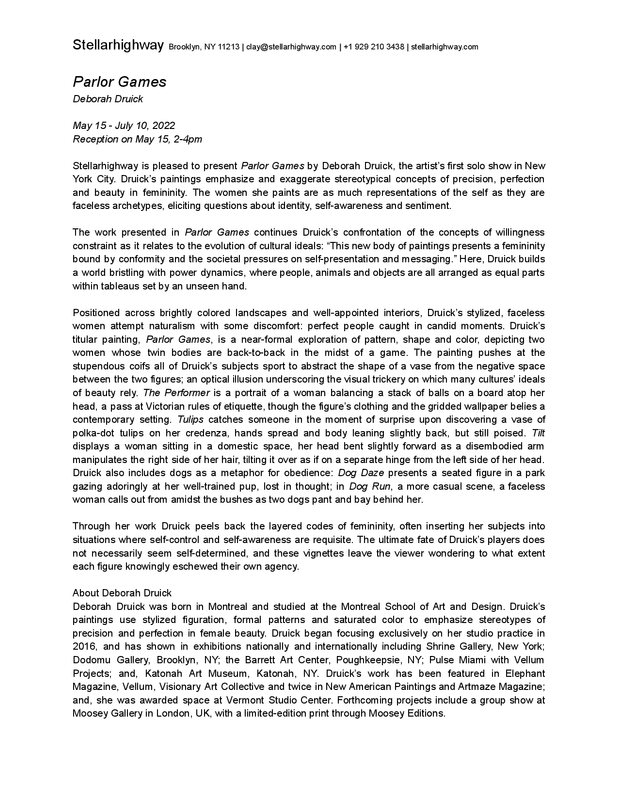 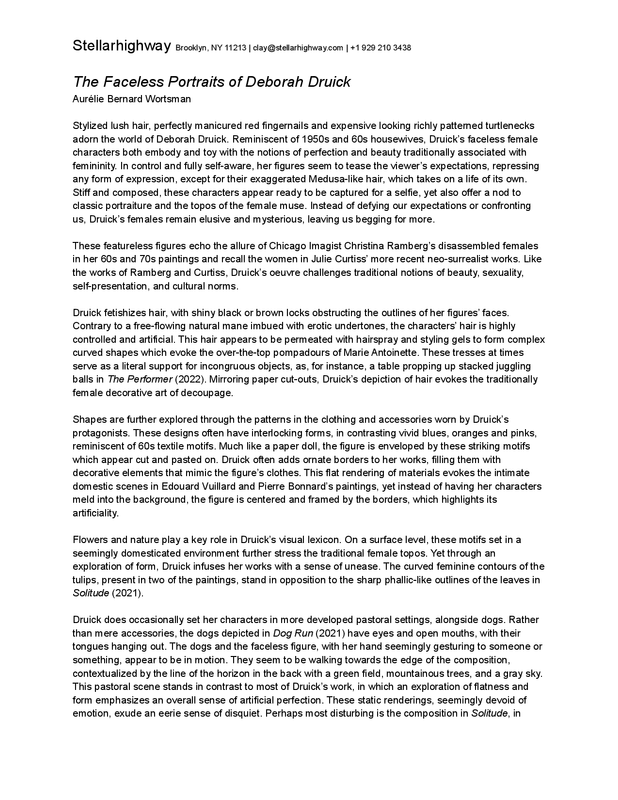 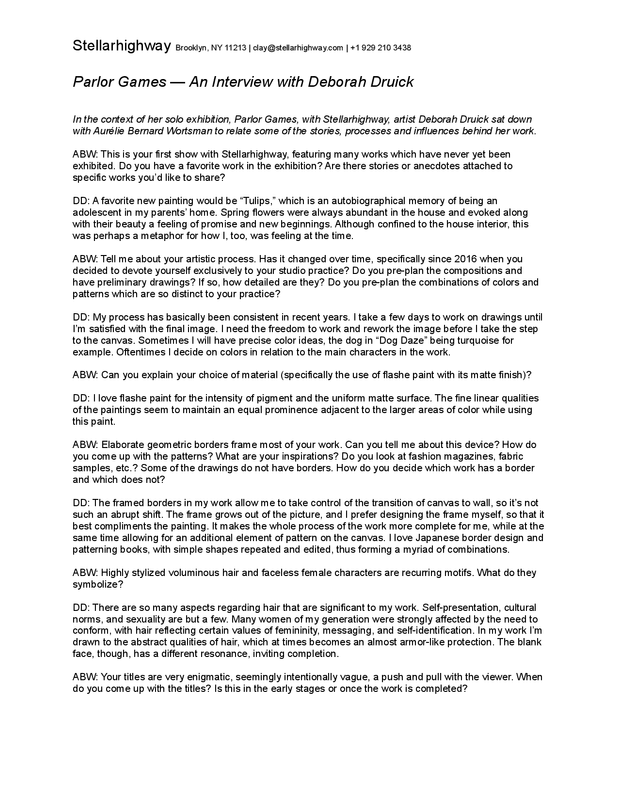 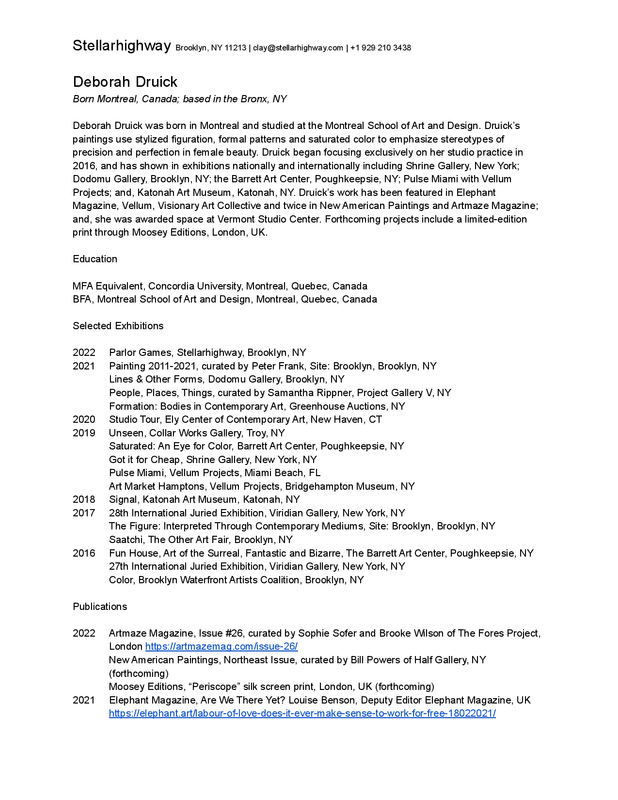